THE GOSPEL ACCORDING TO JOSH

The Gospel According to Josh: A 28-Year Gentile Bar Mitzvah

Based on Kicking My Blue Genes in the Butt

A MEMOIR BY JOSH RIVEDAL

BY THE TIME JOSH RIVEDAL turned twenty-five, he thought he’d have the perfect life—a few years singing on Broadway, followed by a starring role in his own television show. After which, his getaway home in the Hamptons would be featured in Better Homes & Gardens, and his face would grace the cover of the National Enquirer as Bigfoot’s not-so-secret lover.

Instead, his resume is filled with an assortment of minor league theatre and an appearance on THE MAURY POVICH SHOW—a career sidetracked by HIS FATHER'S SUICIDE, a lawsuit from his mother over his inheritance, and a break-up with his long-term girlfriend. Tortured by his thoughts, he finds himself on the ledge of a fourth floor window, contemplating jumping out to inherit his familial legacy. IN TURN HE MUST REACH OUT TO THE ONLY PERSON WHO CAN HELP BEFORE IT'S TOO LATE.

Based in part on his ACCLAIMED ONE-MAN SHOW, Kicking My Blue Genes in the Butt is a comedic and poignant true-to-life tale of love, loss, struggle, and survival—an account of one young man’s passage into manhood.

Proceeds from the book help fund our programming in mental health, diversity, and suicide prevention. 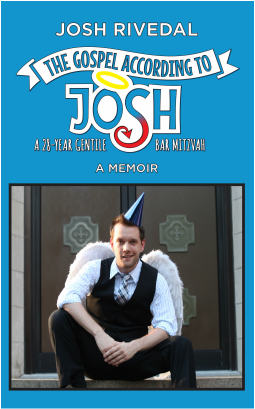 (Based on the Book)

What They're Saying About the Book

"Life doesn't come with a user guide. Instead, we need sane, funny, insightful books like this."
-BRITISH COMEDIAN RORY BREMNER

"With the combination of theatrical wit, sarcasm and humor, raw emotions, familial turmoil, and heart-breaking honesty, Rivedal writes his story and takes his readers on an unforgettable and inspirational adventure. It’s a story of hope, love, and success that guarantees to inspire many who battle mental illness or live in the shadow of it."
-NATIONAL ALLIANCE ON MENTAL ILLNESS

"Josh writes with such humour, insight and courage that his book is a must read. No matter who you are, read it … I have been there with the black dog … I have never received better understanding and advice than I got from Josh's story. What a frank, funny, brave young man he is.”
-JOHN HOWARD, AUSTRALIAN GOLD LOGIE AWARD WINNER